Posted on September 9, 2012 by texasfootballroadtrip

I’ve gotten several requests for a picture of the infamous scoreboard written about in the Wall Street Journal and SI. I thought about arguing about the negative press it’s gotten, but I’m tired of that, if you care about my opinion, look at my post concerning Allen’s new stadium in archives. It’s basically the same argument I’d make for the scoreboard, just a 59.3 million dollars cheaper and a few hundred miles east. Anyway for those who haven’t seen it, here is a picture.

It’s a great scoreboard, but it shouldn’t overshadow the work being done at Carthage. This is an outstanding program, run by hardworking coaches who care about the kids who play there. That this community has decided to provide a world class environment for their kids that goes way beyond a scoreboard is nothing they should have to defend to anyone.

Anyway, on to the game, Carthage bounced back from a zero week upset, beating Lindale 38-21. While they still have a lot of work to do, they took a big step forward, cleaning up some of the mistakes that cost them so much against Jacksonville. The Bulldog secondary did not give up the big play and Carthage did not put the ball on the ground. All week, the coaches emphasized that they traditionally get off to a slow start, so they didn’t panic about what happened last week. Carthage runs the most complex offense I’ve ever seen. With so many adjustments and variations build in and it often takes new starters a while to get it down. I was amazed to watch the offensive strategy sessions this week. I understood just enough to know how much I didn’t understand. The only way a system such as this can be implemented is by a large staff who provide individualized coaching, Three state championships in the last four years show that this formula works. I expect to see Carthage smooth out the rough edges as the season progresses and compete for that fourth ring in December. As Coach Surratt said repeatedly to his squad, “Its not how you start, but how you finish that matters.”

As with my zero week in La Marque, I really enjoyed my short time in Carthage and it was kind of sad to leave as the coaches were sitting down to review the game film last night. 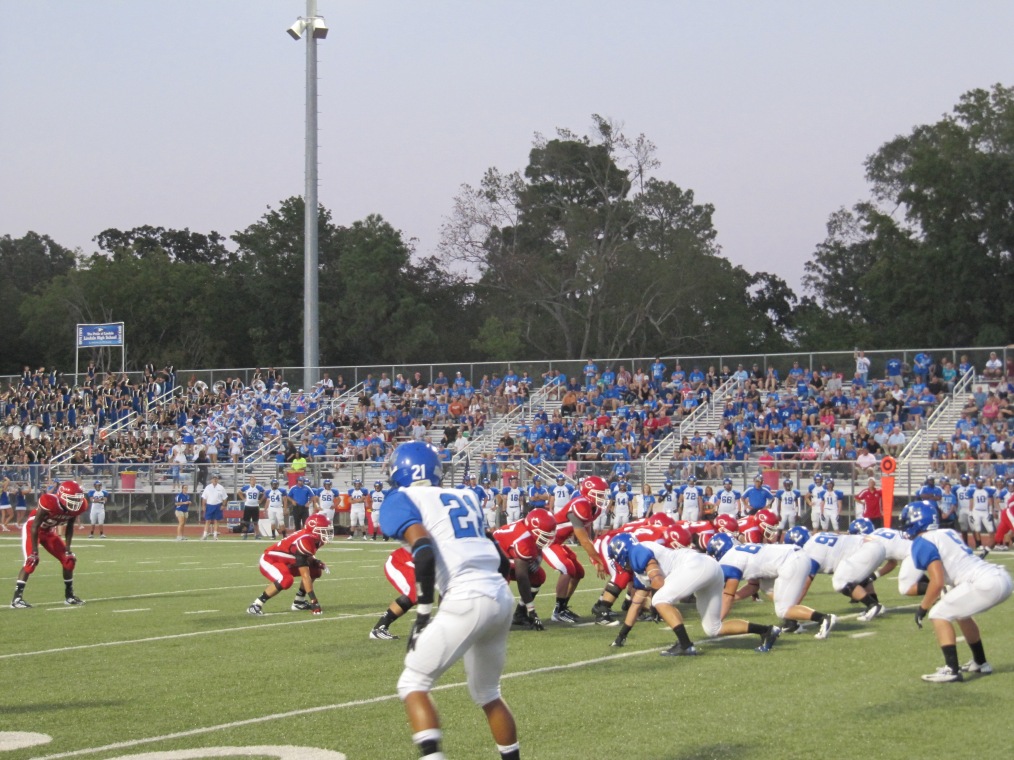 I did leave and drove 300 miles to Port Lavaca, arriving just a little late for the morning coaches meeting. I will be with the Fighting Sandcrabs this week, Check back in a few days for an update.

2 thoughts on “Carthage vs. Lindale”