Posted on October 28, 2012 by texasfootballroadtrip 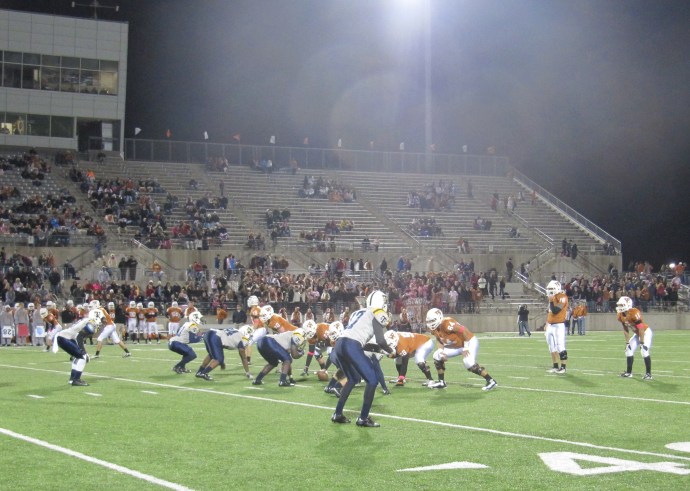 Getting out of a bad run might be the hardest thing to do in sports.  Everything seems to conspire against a team in a hole to the point where it seems impossible to climb out. Bad calls, bad luck and losses look like an avalanche and as much as the coaches try to show confidence, it’s easy for a team to start expecting bad things around every turn.  This week, Stony Point got two injured players back who had been out since early this season. Just as things were starting to look up, they lost their starting running back to an injury during practice; the back that might have been the difference between winning and losing Friday night. Teams who are doing well seem to win games that they probably shouldn’t, and teams on the opposite end find it harder to get over that hump with each tough loss. It has been that kind of year for the Stony Point Tigers.

Friday Night in Round Rock, the Stony Point Tigers fell to the Westwood Warriors in a game that seemed to exemplify the frustrating year the Tigers have had. Stony Point played their butts off, fought to the last play, but just couldn’t overcome some key letdowns and bad breaks that have plagued the Tigers all year.

All the scoring occurred in the 1st half. After taking a 3-0 lead in the 1st quarter, the Warriors responded with their only score of the night. With 3 minutes to go in the half a Stony Point screen pass was intercepted on their own 5 yard line. Westwood punched in it on a quarterback dive two plays later, making the score 7-3 Westwood. The Tiger offense could never get anything going, wasting a tremendous defensive effort. Stony Point held Westwood to just 15 yards rushing on 20 carries and less than 100 total yards, while gaining 231 on offense.

Although the Tigers averaged 4.6 yards a carry they had no margin for error. While theoretically, 4 ½ yards per carry is enough to grind the ball down the field, any miscue, flubbed play or penalty puts a team in a long yardage situation. That was the story with the Stony Point offense all night. The Tigers did a good job pounding the ball, but inevitably a holding penalty or a minus yardage play would put them in a 3rd and long without the passing game to convert. Several times the Tigers got into field goal range, only to be pushed back by a penalty or sack.

A pivotal point of the game came late in the 3rd, when the Tigers recovered a punt that seemed to bounce off a Warrior player on the one yard line; however a penalty returned the ball to the Warriors. It is just the type of thing that seems to happen to struggling teams.

Stony Point is not a great team. They have a lot of tough kids who play very hard, but are usually facing bigger, faster teams in a very tough 5A district. They need to play almost flawless football to win. Given that many of their better athletes are sophomores with little varsity experience; this is a lot to ask.

While the Tigers are not a great team right now, I stand by my choice to cover the Stony Point Tigers as an example of a quality program for my book. As I wrote in my last post, winning depends on a lot of factors and, right now, they all seem to be turning against the Tigers. However, Coach Chessher took over this program when it was in a much worse spot than now and built it into a power. If he can continue to attract outstanding assistant coaches, better days will come.

This is a very good staff and a lot of fun to be around; Coach Chessher is a character, full of great stories you’ll have to wait for my book to read about. The kids work tremendously hard and although they aren’t winning enough right now, they will become better men from being a part of this team. Winning is important, making the effort to win is necessary, but the true reason for a high schools to offer football  is to build boys into men and by that measure the Stony Point staff is doing their job. 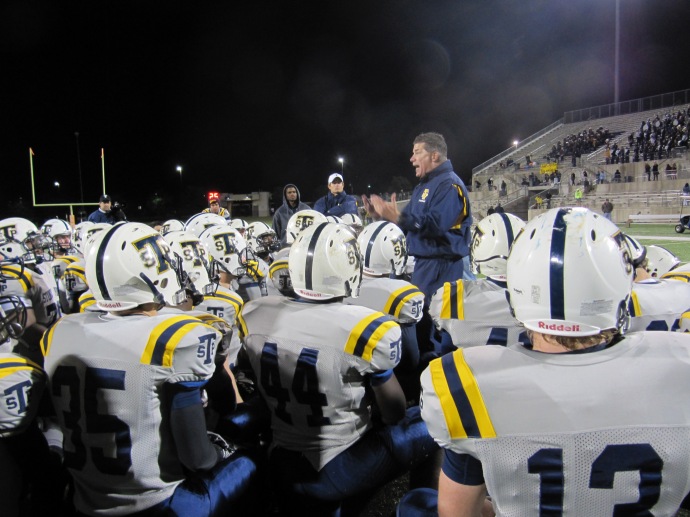 One thought on “Stony Point vs. Westwood”