Posted on December 16, 2012 by texasfootballroadtrip 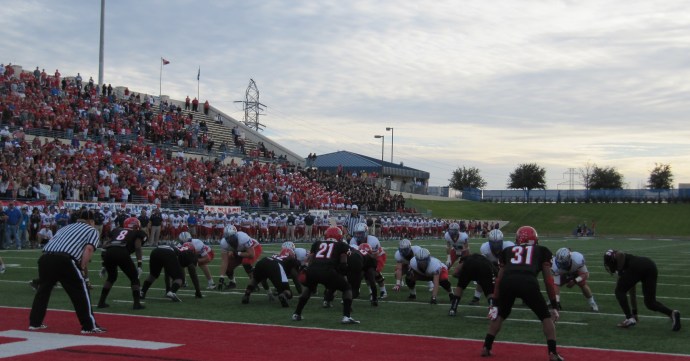 The Cedar Hill Longhorns had a 14-7 lead over the Westlake Chaparrals at the half yesterday at the 5A DII semifinal in Waco. Some leads feel safer than other and going into the half, I feared the missed opportunities of the first half could be decisive.

Unlike last week against Midway, the Longhorns did not play perfect football against Westlake. Cedar Hill had completely dominated the first 24 minutes of play. The Longhorn defense was outstanding; Westlake had just three first downs at the intermission. However, a bounce off the leg on a ‘Horn DB during a quick punt gave the Chaps the ball on the 1 yard line leading to their only 1st half score. The Longhorns blew several scoring chances during the 1st half. A great pass into the endzone went through the hands of Laquivonte Gonzalez when he lost it in the sun and sophomore kicker Brooks Ralph missed two field goals that would have extended the Longhorn lead.

Any team playing five rounds into the playoffs is dangerous and the fact that the Chaps had managed to keep this game as close as they had was scary. It’s hard to leave so many points on the field and win against great teams.

The second half was a seesaw battle, Cedar Hill faltered again, fumbling the play after getting a defensive stop and setting up a tying score by the Chaps. The ‘Horns responded with a 77 yard run by Bobby Jackson, sprung the final 20 yards by an outstanding block by receiver Quincy Adeboyejo to retake the lead 21-14. When Gonzalez scored from 8 yards out to give the Longhorns a 28-14 lead, it looked like the game might be in hand.

Westlake responded with a touchdown to close the score to 28-21 with 6:10 remaining. Cedar Hill’s offense still couldn’t get going and were forced to punt again. The Chaps converted on a great pass and catch on 3rd and 15 to the 50. On the next play, the Longhorns were caught in a blitz and nobody covered running back Sean Rollins in the flat. The pass went to the 6 yard line and the Chaps punched it in a few plays later tying the score at 28 with 2:30 to go.

The momentum was completely on Westlake’s side, the Chap crowd was on their feet when the ‘Horns took the ball for their final drive from the 28. After a first down, Cedar Hill faced a 3rd and 12 from their own 38, needing a first down or facing likely overtime.  Cedar Hill quarterback Damion Hobbs connected for 21 yards on an amazing catch by Adeboyejo to keep the drive alive, another 10 yard pass and a five yard scramble by Hobbs put the ball on the Westlake 25 with 8 seconds remaining when Cedar Hill called their final timeout. The Longhorns decided to put the game on the foot of Brooks Ralph despite his two earlier misses. This time, the sophomore connected from 42, sending the Longhorns to the championship with a 31-28 victory.

Cedar Hill did not play their best football, but they did have some great clutch performances. Bobby Jackson rushed for 172 yards on 15 carries, filling in for power back Larry Hill who injured his knee against Midway. Adeboyejo made some amazing catches when most needed. Despite a few big play breakdowns, the defense made some big stops and completely dominated the first half. The poise shown by sophomore Brooks Ralph, getting a chance to redeem his earlier misses; calmly winning the game in the face of all that pressure was very impressive.

The Longhorns will play their first championship game since winning it all in 2006. They meet the undefeated Katy Tigers Saturday at Cowboy Stadium. I’ve been very fortunate that I’ve been able to hitch my wagon to the Longhorns just as they started their incredible run six weeks ago. I couldn’t have scripted it better than having one of my original 11, playing on the final day I’ll be working on this project.  It’s been a great ride and I’m looking forward to a great finish. 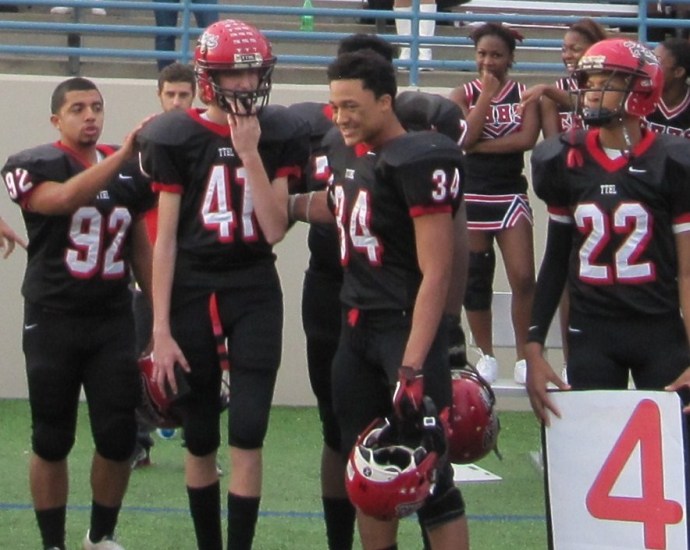 Ralph #41 moments before the kick 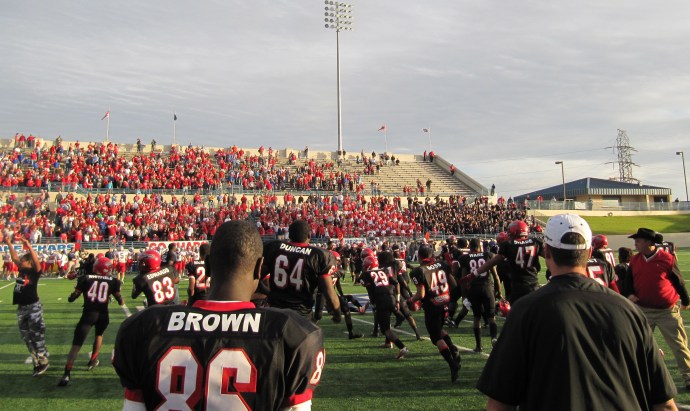