Posted on December 27, 2013 by texasfootballroadtrip 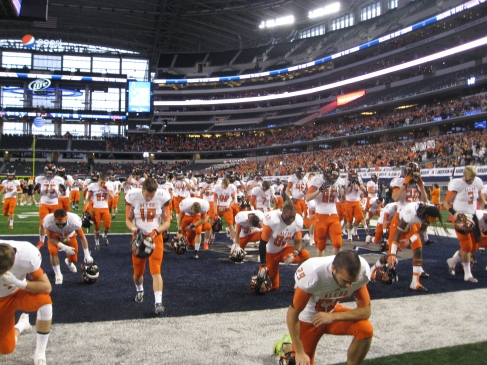 First off, What an amazing event. As I said last year, every high school football fan owes it to themselves to make it to Arlington to see this one time in their lives. I doubt there is anything like it in the world. The best programs in the country, from tiny to huge schools playing ten games in three days in front of great crowds.

I say Arlington because, although the current format has only been in place for three years, I just can’t see it changing anytime soon. From a cynical view it just makes too much money for the UIL. Over 200,000 attended the three day event. The biggest crowd ever to witness a high school football game, over 54,000 people, attended the Allen-Pearland game. Less cynically, it’s just a great showcase for the sport. Performing in the venue itself is a reward and great experience for the young men & women (cheer squads and bands) for those who reach the game. As a Stamford assistant told me, “It’s a headache for us, but worth it to have these kids play in the greatest football stadium in the world.”

I’ve already written about Stamford’s win over Shiner. Time to cover my other three teams who played last weekend. The early game Friday was a East Texas battle between Kilgore and Carthage. Most predicted a great game and it was. Carthage jumped out to a 28-10 lead late in the 3rd, but the game never felt safe. In the back of my mind was the memory of El Campo coming back to beat the Bulldogs in the 2012 semi’s and when Kilgore, closed the score to 28-23 with 3:40 remaining it definitely felt like a game. After recovering Kilgore’s onside kick attempt. Carthage iced the game with a 24 yard TD run by Tevin Pipkin to make the score 34-23 with :50 seconds left. Impressive game by Carthage and it was great to see the Bulldogs celebrate and play well until the finish.

The early game Saturday was between Aledo and Brenham. The Brenham Cubs hung around early, the game was tied 3-3 halfway through the 1st half, before the bearcats scored 28 unanswered points to go up 31-3. In the end the Aledo Bearcats continued the dominance they showed most of the season, winning by a final score of 38-10. Remarkably, Aledo became the first high school team in history to score 1000 points in a season. A number it would be impossible to reach in states where 12 to 15 games are the limit. But even with Aledo’s 16 game season, the Bearcats averaged 64 points a game. Aledo’s offensive coaches are quick to give credit to their defense for putting them in position to score so much. It’s hard to imagine this record being broken anytime soon. This is the fourth Bearcat title in five years and fifth under head coach Tim Buchanan.

The final game of the season was a rematch of last years 5A-DII title between Cedar Hill and Katy. Cedar Hill’s coaches were excited to have a second chance, feeling they hadn’t played well in last years game. I saw something else too. Last year the Longhorns were thrilled just to be playing in state after many injuries and so many had given up on them early. This year, getting there wasn’t enough. The Longhorns went in believing they were the better team and believing, if they played well this time, they would come out on top. I only hoped their optimism was warranted.

It was a crazy and exciting game. The Longhorns jumped out to a 10-0 lead, looking like the better team, before turnovers completely swung the game to the Katy Tigers. In the second quarter a long Katy run, got the Tigers on the board and two straight fumbles lead to two more Katy scores and a 21-10 halftime lead. The Tigers tacked on a field goal on their opening 2nd half possession, giving Katy a two touchdown lead halfway through the 3rd.

Hill started to climb back on a gutsy 4th and 3 Wildcat run by receiver Damarkus Lodge for 40 yards and a score. 24-16. Now, it was great defense and Katy turnovers that put the Longhorns back on top. A botched fumble snap led to a Longhorn field goal early in the 3rd. 24-19. Defensive tackle Xavier Washington strips the ball from a Katy back on the next possession. The ‘Horns score on a tough pass to the Lodge in the front corner of the endzone. 27-24 Longhorns. Katy fumbles the ensuing kickoff, Cedar Hill recovers and punches it in, 34-24 Longhorns with 3:17 left.

After the way the “Horns lost last year, I was just so glad to see them come out on top. All four of the groups I followed this weekend are made up of great kids and coaches. I appreciate all of them letting me be on their sidelines and in locker rooms for the ultimate moment a high school football team can achieve.

In ten days, I was on 6 sidelines (two semifinals and four championships). My teams won every game. The coaches joked that I brought them good luck, The only thing I did was pick outstanding programs to follow, I was the one fortunate to have such great experiences.