Posted on May 8, 2015 by texasfootballroadtrip

I apologize for the tardiness of this post. My wife is in town, it’s a bye week and we’ve been busy seeing as much of Europe as possible in two weeks.

Since I came to Germany, Sunday May 3rd hung over me like a cloud. This was the first of two games we will play against the Albershausen Crusaders. The Crusaders had gone 10-0 in 2014 before failing to move up to GFL II due to playoff losses. The word is that, this year, they plan to get over the hump and have brought over three very talented imports.
Looking at the film, I saw plenty to worry me. Albershausen has a very tough front, they play sound defense and are very well disciplined. I knew this wouldn’t be a cakewalk.
The game did not start well for the Razorbacks. The Crusaders recovered the opening pooch kick and moved the ball to our ten before settling for a field goal. We moved the ball well on our first drive, but some sloppy play forced us to make an unsuccessful field goal attempt. Again, the Crusaders moved the ball well and looked poised to take a 10-0 lead before the tone of the game completely changed. The defense stiffened and held on a 4th and 10 from their 10. Looking back, to me this sequence was the most important of the game. Never again would the Crusaders challenge our defense.

The offense responded, driving 95 yards on ten plays scoring on a pass to Michael Mayer, 7-3 Razorbacks. Dominant defense and a blocked punt gave us a short field gave us great field position and we capitalized on a nice run by Canadian import Steve Spagnuolo and we are up 14-3 at the half.
A pick-six interception by linebacker Sasha Braendle and another TD to Spagnuolo effectively put the game away in the second half. I wish I could say we played a great offensive game, but we didn’t. I was proud of two of our drives, but we were sloppier than we should have been both early and late. I’m worried about our inability to finish after we get comfortable leads. That said, it was a huge relief to come out of Albershausen with a win. 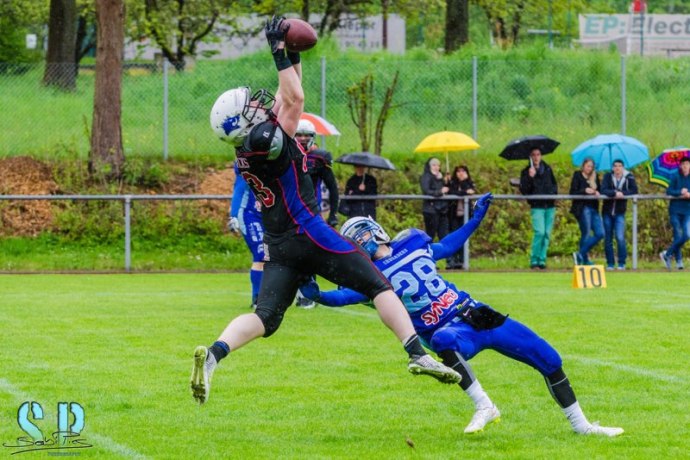 The real credit this week goes to our defense. The decisive battle was between our defensive front and their O-line and it was a knockout. Crusader backs were met at or behind the line when they attempted to run. I almost felt sorry for Albershausen QB, John Rock who had no time to throw and got crushed repeatedly.
It’s a great feeling to line up against a worthy opponent and come out on top, but the worry never ends. We will meet the Crusaders again later this season. It’s always tough beating the same team twice during the same season. I expect they will be prepared. I know we’re enjoying this big win for our program, but I hope we don’t let it go to our head. We still have a lot of work to do.
I’m writing this from Paris as my wife is out shopping. Two more days then she heads home and I’m back to Germany on a fast train in time for practice Monday. Time to get back to the vacation.
Au revoir