A Day With the Schwabisch Hall Unicorns

Posted on June 10, 2015 by texasfootballroadtrip 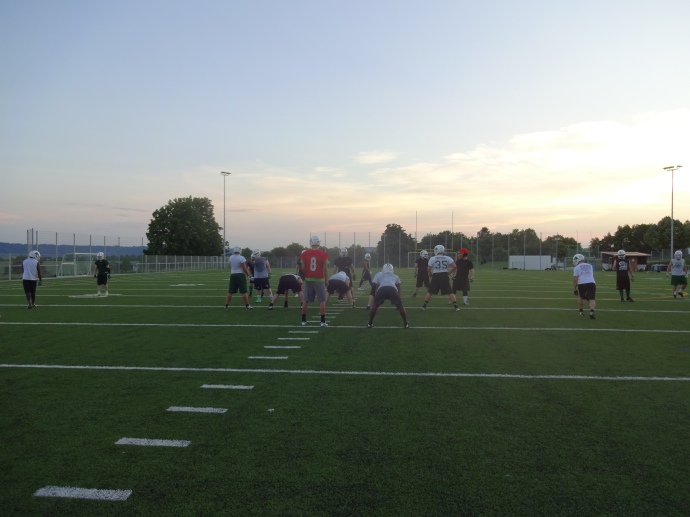 There are two paths to success for the elite of European football; building it or buying it. Countries limit the number of North American players, but without deep infrastructures, many top teams import talented Europeans to fill out much of their rosters. I won’t judge a program for how it climbs the ladder, but it’s great to see that the Schwabisch Hall Unicorns, Europe’s top-ranked team, got there the old-fashioned way, by building it.
Last week, I had the opportunity to visit Schwabisch Hall and watch the undefeated Unicorns practice. That I was going to see something different became apparent as soon as I arrived. Unlike the soccer fields most practice on, this team uses an actual FOOTBALL field, artificial turf, with dominant football lines, a filming tower at the 50 and a latter for end zone filming situated at the correct height.
The practice itself was something I haven’t seen since leaving the States. There is no standing around, it’s a low-tempo pregame practice, but there’s never a moment when everyone is on “break”. From warm-ups through the end of the scripted team/offense/defense/special-teams run-through things move quickly. Activities are consistently changing, creating natural breaks for everyone to get a drink on this hot day. The team is very impressive as well. Position players seem to be in good condition. 38 players participate and I’m told this is a lower number than usual. Still, there are enough to fill the special teams, personnel groups and scout teams, something rarely true at European practices. Nine coaches are working; all have specific and well-designed roles. Afterwards-as they do after every practice- the staff meets in a restaurant above the game field, to discuss personnel and other organizational issues.
I notice almost all coaching and meetings are in English. This is the first I’ve heard this over here. Coach Sigi tells me that when Americans are involved English is always used. The Germans all know the language, and he wants everyone included and able to participate in discussions.
What I see is a little humbling for me as a coach. I’m proud of what we’re doing in Ravensburg, but I must admit that the best Razorback practice looks nothing like what I saw in Schwabisch Hall. The Razorbacks state goal is eventually to climb to the first division, and this reminds me we still have a long way to go before we’re ready.
That said, I recognize that what Coach Seigfried Gehrke built did not happen overnight. Coach Sigi has been the Unicorn head coach for 25 years and his program is built on a solid foundation of outstanding coaching and an excellent youth program, providing nearly all the non-import players.
A consistent theme of my coaching philosophy is that, in football, more than any other sport a team gets what it deserves. The team putting in more collective man-hours almost always wins. By this measure, the Schwabisch Hall Unicorns deserve to be where they are. They’ve earned their current success by paying the price for 25 years.
That football success is most often earned through hard work and commitment is what makes this the greatest sport on earth in my opinion. It’s gratifying to see that this formula works the same way in Germany as it does in the States.
While the Razorbacks are earning our successes in Germany, we still have far to go if we want to rise to the GFL 1. This is right and fair. We do not yet deserve to be there…but that doesn’t mean we never will.