Posted on October 21, 2012 by texasfootballroadtrip 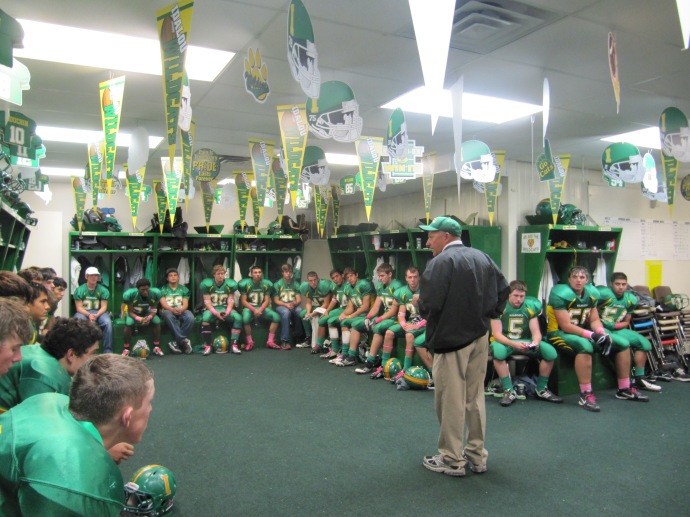 Friday night, after the Idalou game, I left West Texas for the first time in three weeks. One of the interesting things I learned on this journey is just how diverse Texas is. Different parts of this state have completely different looks, feels and even sounds. East Texas is nothing like North Texas or the Rio Grande Valley, Central Texas or the Coastal Bend. The way of life, the climate, terrain and the culture of all these places are very different from one another. The common thread of all these places is a very strong Texas pride, (Texas school kids not only recite the Pledge of Allegiance but the Texas Pledge every morning) and, of course, love of football.

West Texas is probably closest to the stereotypical Texas most people envision. Men wear boots and cowboy hats to football games, people are all “fixing” to do something and the wide-open plains are dotted with oil derricks and cattle. I’ve moved on to Round Rock for the week, but I really enjoyed my time in West Texas and look forward to getting back during the playoffs. I met a lot of great people in Idalou, Throckmorton, Abilene and Stamford and all four of these football programs are a lot of fun to watch.

The Idalou Wildcats faced a tough district challenge by the Denver City Mustangs. Both teams came in with 4-2 records and the Mustangs have some very good athletes. While Denver City started out strong grabbing the early lead, they simply weren’t strong enough in the trenches to stop the physical ground game of the Wildcats. Idalou rushed 44 times for 366 yards and stretched their district record to 2-0, and a 35-20 win in a game that really wasn’t that close. Quarterback, Seth Reagan ran for 111 yards and three touchdowns and passed for two;  Travys Bravo, Tylo Kirkpatrick and Koal Houchin all had big gains on the ground as well. The offensive line was the big difference in this game. Idalou linemen blew the Mustangs off the ball all night while Denver City’s passing attack was inconsistent.

I get the idea that this was a typical performance for the Wildcats, it fit their formula very well. This is a team built on the very West Texas philosophy of winning with a strong running game and defense. The Wildcats do not have flashy athletes.  Idalou doesn’t win pretty, what they do is grind teams down with outstanding fundamentals and superior strength. Their weight program is outstanding; the way the kids literally run from station to station between sets is amazing. I don’t know if I’ve seen more done with 20 minutes of lifting, three times a week, anywhere else. I’ve seen some very good weight rooms on this tour.

As I wrote in the previous post, Idalou is a great example of how the old ways still work. Coach Long and his staff have stuck to strategies that have been proven over generations. They’ve adapted their scheme for the modern game, employing some spread offense and zone running, but they haven’t forgotten the fundamentals that have made them a consistent winner. 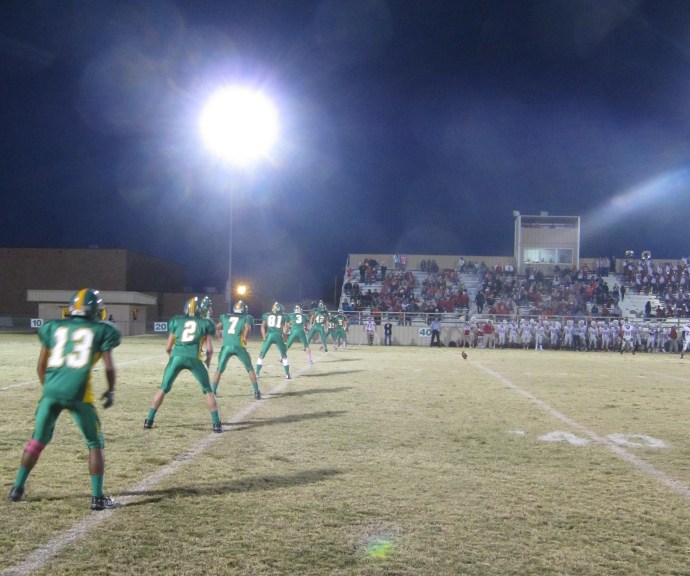 Posted on October 17, 2012 by texasfootballroadtrip 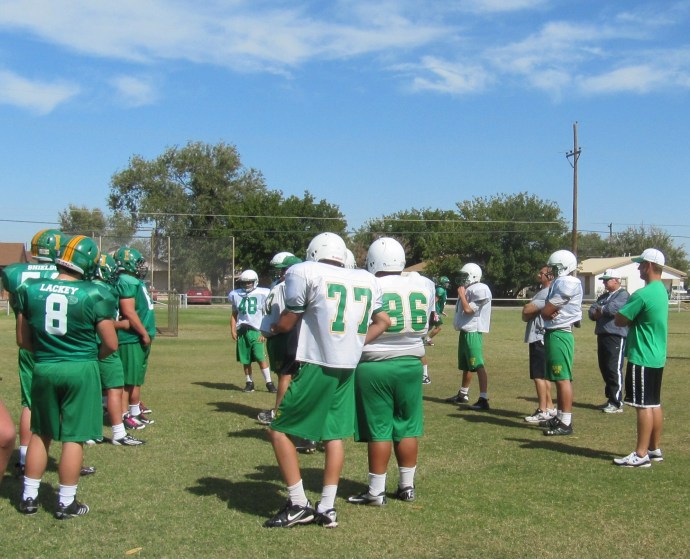 Watching the Idalou Wildcats this week has been a lot like climbing in a time machine. From the style of the Saturday morning scout to their offensive and defensive philosophy, much of what this staff does is deeply rooted in the football of a different era.

While most staffs scout film on laptops in their own corners, Idalou coaches all watch the film, start to finish as a staff. While many programs are increasingly relying on the spread offense, Idalou runs a smashmouth, two back offense that relies on getting push on the line of scrimmage. While most defenses have gone to attacking schemes, with linemen getting through gaps, while the linebackers fit into the other gaps, Idalou uses a key reading scheme where defensive personnel read the linemen opposite them.

This isn’t to say that the Idalou staff is behind the times, they aren’t, they know what they’re doing and it works. The Wildcats are currently 4-2, the two loses coming against quality 3A schools; they’ve made the postseason the last 13 years straight and won a state championship in 2010 using this prescription.

The Idalou staff has mostly been together since 1990, and while they have adapted their schemes to fit the teams they see, they haven’t thrown out their knowledge of football to fit someone else’s idea of the ‘right’ way to win. Idalou is another example of how, in football, there is no right way to do anything. There are almost endless ways to play football effectively. Many approaches work as long as the philosophy is well thought out, well taught and the kids buy in.

With only 8 coaches covering 5 teams (7th, 8th,9th jv and varsity), practice organization is impressive. Players at Idalou have great technique and there isn’t a lot of wasted time on the field. From a coaching standpoint it’s a lot of fun to watch a team that still does things the way they were done when I started coaching. It reminds me that the roots of the game are still important; blocking, tackling, sound defensive technique and ball control will always work.

Posted on August 14, 2012 by texasfootballroadtrip

When I first contacted Coach Don Long at Idalou about taking part in my project, he tried to warn me away. He told me, ‘Sure, but I think it will be pretty boring, my staff has been together for a long time and we pretty much have our routine down.’ I reassured him I was looking for situations such as his, a successful program with a stable staff. You may have noticed that all the teams I’m covering fit that description. This is no accident. In my book I want to make a case for the Texas model of high school football and the best way is to highlight quality programs where kids are benefiting and coaches are doing things the right way.  My other, more selfish, reason is that I can learn a lot from watching good coaching, and I figure to be a much better coach when I put the whistle back on. In any case, after watching Idalou today, I’m glad I chose them. 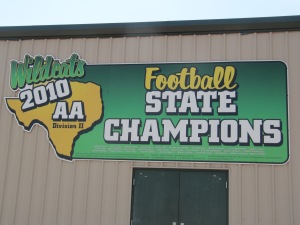 Idalou High School, just north of Lubbock, has 309 students and 105 of them were padded up this morning. The practice I saw was very well organized and efficient and the coaching was well focused and planned out. This is a young team with only two returning starters on each side of the ball and, as a result, a lot of teaching is going on. I was impressed with the progression they used. All three teams and position coaches on all levels were consistent in teaching their parts of several plays the Wildcat added on offense. After drilling with position coaches, they progressed to group implementation and finally to the entire team. The same process was used with all three levels. It sounds simple, but too often you don’t see this coordination on younger, less stable staffs where coaches aren’t always on the same page as to how something ought to be done. 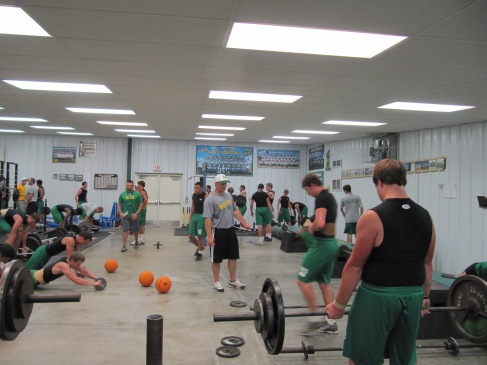 The other impressive area today was the lifting workout the varsity went through after leaving the field. Quick, businesslike with no standing around; it was similar to what I saw last Friday at Stamford. All three of my small schools (Idalou, Stamford and Throckmorton) put a lot of emphasis on weight training. I’m sure it has a lot to do with the success of all three programs.

Tomorrow I’ll be going to Abilene High, then to the Metroplex to see Aledo and Cedar Hill. After that I head south to Round Rock to watch Stony Point. Then, early next week I’ll go further south to Harlingen, and finally I’ll complete the loop of my preseason visits be heading to Port Lavaca Calhoun, before head back to La Marque for the week of the La Marque-Ball game.